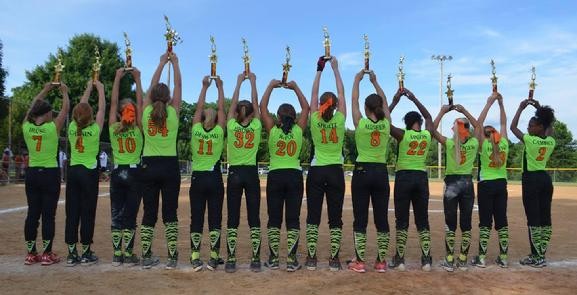 History of Softball at Germantown Baseball

Softball has been played on our fields for over 40 years. Over those years, Germantown has developed girls into both athletes and great citizens.  Many of those original players still give back to our league by bringing their families back to play, to volunteer, coach and serve on the board of directors.

Over the years, Germantown Softball was well known through the region as a one of the premier recreational softball leagues in Louisville.  Recently, Germantown has brought home several USSSA Great Lakes National Tournament Slow-Pitch titles in 8U, 10U, 12U, and 16U. Even with the successes in slow-pitch softball, Germantown realized that we needed to expand our league to fast-pitch.

Fast-pitch softball was introduced to Germantown in 2013 and was fully implemented in 2014. Germantown now offers Fast-Pitch softball from 8U through 16U divisions. We are constantly promoting softball camps, coaching clinics, pitching and hitting lessons to help those girls who want to improve their game. We are looking for experienced volunteers to coach our girls and who are willing to learn and grow with the league.

Germantown's 2014 12U All-Stars team won the Fern Creek Summer Sizzler tournament, gaining a bid to Babe Ruth Nationals.  They defended their State Champions title from 2013 to win the Babe Ruth Western Kentucky State title again in 2014. The 12U team traveled to Alachua, FL for the Babe Ruth World Series tournament where they battled to achieve 6th place in the world.

We have achieved a lot in the first years of fast-pitch softball at Germantown and are working had to build the program even further. Developing all of our players, no matter what the skill level, into great citizens is our goal throughout our league.