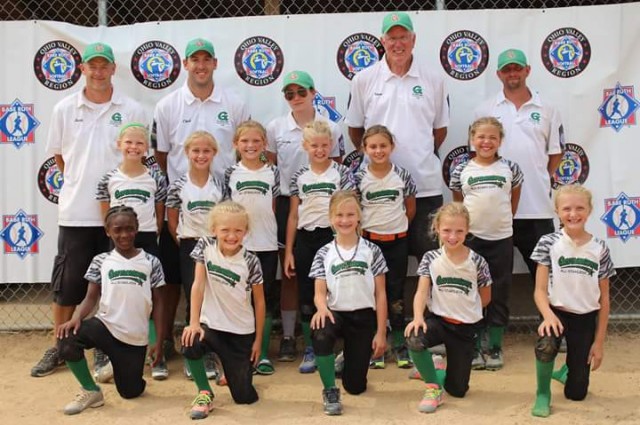 Germantown Softball set new personal records during all stars this year! We had all 4 age groups representing Germantown during the East/West Kentucky State Tournament with our 8U, 10U, 12U and 16U. All 4 teams battled hard during State in which 3 teams placed 3rd. For the first time in our program, we had 4 teams travel to Fairfield, Ohio to take part in the Ohio Valley Regional! Once again, all 4 teams placed high seeds in each bracket from #3 seed to #1 seed. The Regional ended with our very own 8U team,, managed by Steve Brown and coached by Andy Keen, Chad Shannon, Brian Prinz and Piper Cassetto, playing in the Ohio Valley Championship. They played two intense championship games and came out Runner Up, which is the best Germantown Softball has ever placed in the Ohio Valley Regional since becoming fast pitch. Congratulations and thanks to all of our players, coaches, volunteers and family on another successful season at Germantown Ball Park and look forward to continued success in the upcoming year!
​2016 8U Ohio Valley Region Runner Up
21 Jennica Alexander, 1 Charleigh Banks, 20 Ashlyn Bryant,, 47 Avaleigh Keen, 22 Katelyn Keen, 8 Claire King, 2 Allison Meeks, 23 Brynn Prinz, 13 Madison Shannon, 5 Zariah St. Gerard, 15 Trinity Ward, 3 Tristan Ward and 28 Emerson Weiter
External links are provided for reference purposes.GERMANTOWN BASEBALL, INC. is not responsible for the content of external Internet sites.
CopyrightGERMANTOWN BASEBALL, INC. All rights Reserved. Privacy Notice
Sports League Management Software byBabeRuth